We were paid a visit last week by Elaine Gill (the new voice of Joan in our Wise Woman's cottage!)  The new collection of spells and charms which visitors listen to were collated by Steve Patterson, Gemma Gary and Jane Cox.  They are old West Country ones and are performed brilliantly by Elaine - a West Country woman.  With sound effects such as crackling fire, mewing cats and screeching owls it is really evocative. Here is a photo of Elaine and Steve with Joan in her cottage. 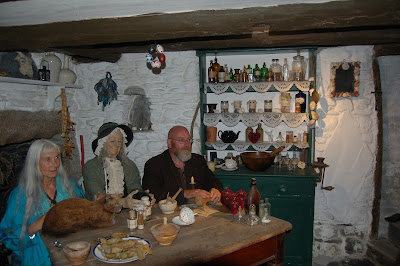 The new cottage soundtrack has been going down well with visitors.  Everyone at the Museum liked the old recording but it had played for over ten years and it was felt that now was a good time for it to be refreshed.  It is nice for repeat visitors to experience something new and it is a good opportunity to introduce visitors to different charms and spells.  All that has happened is that Joan has expanded her repertoire!

The cottage soundtrack will be available as a CD for sale soon and a book about Joan's cottage will also be published in the foreseeable future.  The CD features an introduction by Steve and some great music at the end.

Many thanks to everyone involved for all their work on this project!


Posted by Museum of Witchcraft at 6:00 pm

Look forward to hearing it when we are next visiting from 1st - 5th Sep.