Baphomet Atop the Plinth 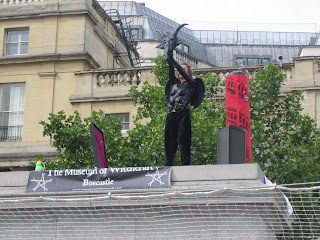 Had a great time in London on the weekend culminating in the appearance of Julian Vayne (one of our Friends' trustees) appearing on the fourth plinth in Trafalgar Square. He is one of the more interesting performers who have performed on the plinth and was resplendent in full Baphomet costume (well not quite full - the 'cod piece' was deemed a tad too risque) with an amazing leather mask made by a very talented chap called Peter who was in the immediate audience. Julian used the experience to promote the museum and banners were placed on the plinth. He also performed a ritual, had a bubble machine & a punching bag-esque Axis Mundi (seen left in red) which the crew asked to keep. I have a couple of pics but Simon Costin took some excellent ones so when I get a copy of these I'll put them up. Thanks Julian for doing a fab job on the day - not something the tourists were expecting methinks!!
Posted by Museum of Witchcraft at 9:33 am